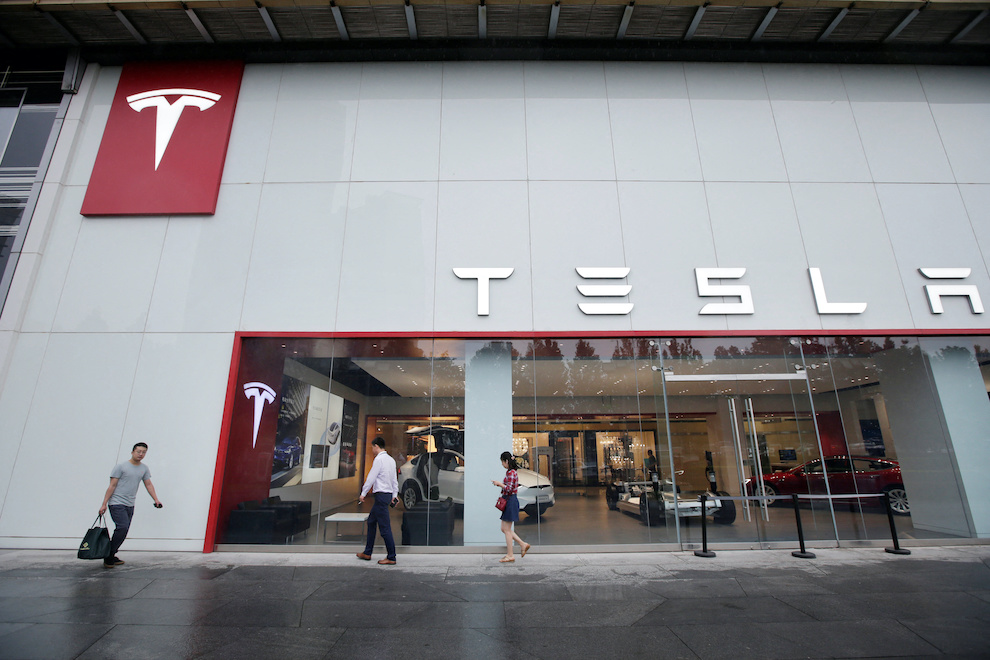 Tesla to Seek Deal for Stock Split; Rise in stocks

A stock split by Tesla would be its second since 2020 and would follow stock split announcements by other major US companies in recent years.

Tesla Inc will seek investor approval to increase its number of shares to allow for a stock split in the form of a dividend, the electric carmaker announced on Monday, pushing its shares up about 5%.

The plan came as the company suspended work at its Shanghai factory amid Covid-19-related lockdown measures and its head of artificial intelligence took a sabbatical as the company aims to reach full self-driving capability this year.

The proposal, first announced on Twitter, has been approved by its board of directors and shareholders will vote at an annual meeting. The stock split, if approved, would be the last after a five-for-one split in August 2020 that made Tesla shares cheaper for its employees and investors.

Following a pandemic-induced rally in tech stocks, Alphabet, Amazon.com and Apple recently split their shares to make them more affordable.

Since the stock split in 2020, they have jumped 128%, pushing the company’s market capitalization above $1 trillion and making it the largest U.S. automaker by that measure.

Tesla has delivered nearly a million electric cars a year, while ramping up production by setting up new factories in Austin, Texas, and Berlin amid Covid-19-related disruptions and growing competition.

Tesla told suppliers and workers on Monday that its Shanghai factory in China would be closed for four days as the financial hub announced it would go into two-stage lockdown to conduct mass Covid-19 testing.

Tesla CEO Elon Musk said on Monday he had ‘supposedly’ tested positive for Covid-19, days after attending a car delivery event at the company’s new factory in Berlin. .

“We think Berlin is ramping up, and MiniCar and India are on the horizon, we would be fine with timing,” said Roth Capital analyst Craig Irwin, hinting that companies generally proceed to stock splits when good news is coming.

Head of AI on sabbatical

Musk also said Sunday that Tesla’s head of artificial intelligence, Andrej Karpathy, is on sabbatical for a fourth month, at a critical time when Musk wants to achieve full self-driving capability and deploy a prototype robot. humanoid this year.

“Especially thrilled to have some focused time to hone my technical edge and train neural networks!” Karparthy tweeted.

“Although I already miss all the robots and GPU/Dojo clusters and can’t wait to have them at my fingertips again,” he said, referring to Tesla’s AI Dojo chip.

Meanwhile, Tesla’s announcement that it will seek shareholder approval to increase its number of shares to allow for a stock split adds to a recent flurry of megacaps splitting their shares in a bid to attract more investors.

Tesla said in a filing that it would hold a vote at its next annual meeting of shareholders to increase the number of authorized shares to allow for a stock split.

A stock split by Tesla would be the electric car maker’s second since 2020, and it would follow stock split announcements by other major U.S. companies in recent years.

Over the past two years, Apple, Nvidia and Tesla have split their shares, while Amazon and Alphabet, Google’s parent company, recently announced upcoming stock splits.

Companies split their shares to make their stock price look cheaper and attract more investors. However, splitting a stock does not affect its underlying fundamentals.

Still, BofA Global Research said in a recent research note that stock splits “are historically bullish” for companies that embrace them, with their stocks marking an average return of 25% a year later compared to 9% for the whole market.

Tesla stock jumped 8% on Monday, adding more than $100 billion to its market value.

Amazon has gained about 20% since March 9, when the e-commerce heavyweight announced a stock split that will take effect June 6.

That compares to a 7% gain by the Nasdaq over the same period. During this period, Wall Street also saw a broad rebound in megacap growth stocks from losses early in the year, as well as volatility from rising interest rates and the invasion of the Ukraine by Russia.

Tesla was the most traded stock among Fidelity’s online brokerage clients on Monday, with buy and sell orders nearly evenly split, suggesting retail investors are cautious of the company.

Since joining the S&P 500 in December 2020, Tesla has been one of its highest weighted stocks, currently making up more than 2% of the index. It has gained around 300% since announcing its first stock split in August 2020.

Other S&P 500 companies with nominally high stock prices that analysts say could hint at a future stock split announcement include Chipotle Mexican Grill, up 0.1% on Monday to 1 $558, as well as Booking Holdings, which almost trades at around $2,247.

Sean O’Meara is an editor at Asia Financial. He has been a newspaper man for over 30 years, working for local, regional and national titles in the UK as a writer, sub-editor, page designer and print editor. Passionate about football, cricket and rugby, he is particularly interested in the financing of sport.