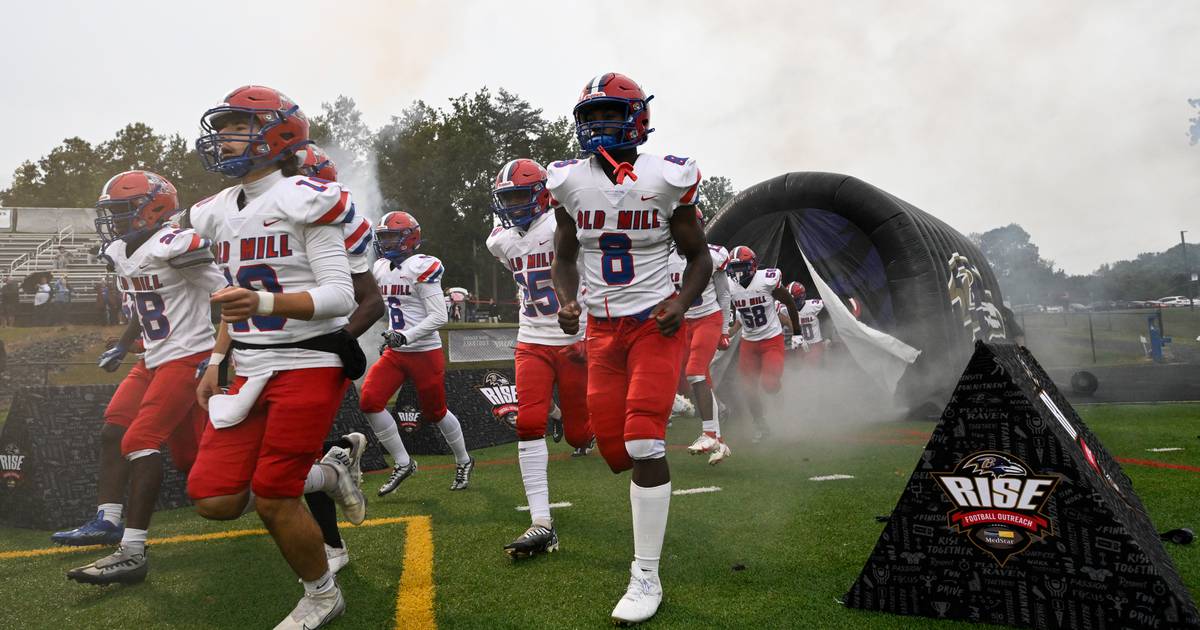 By the time the Old Mill defense collided with South River running back Trashaun Timmons on a 2-point overtime conversion try, something so elusive and yet so important had finally happened for a young Patriots team.

In a rainy back-and-forth with the Seahawks on Friday night, a team made up mostly of first-year starters might have finally found out who they are. A team that could ride a rollercoaster game, get things done offensively in overtime before holding the other one.

A team that could win tough matches.

By converting two runs in overtime and preventing South River from doing the same, the Patriots prevailed 28-26 at the Ravens RISE High School Showdown.

“It was so awesome to win, especially a dogfight,” said Old Mill running back Maximus Jones, who had three touchdowns. “A dogfight is different.”

Old Mill (3-2) converted just one of three two-point attempts in regulation time but were willing to take the risk in extra time. Coach Mike Pfisterer believed his players could do it in overtime.

“They wanted to run the ball. We’re going to follow what they wanted to do,” Pfisterer said. “Those two points were huge. I’m not going to lie, the offensive line wanted a few of those plays – they deserve it.

Winning a match like this will do wonders for the team on the road ahead.

“You want to reach the top at the right time. You want to keep improving,” Pfisterer said. “We go up against a lot of guys and just try to find the right recipe. … I love the way they fought, the coaches fought. It was a grinder.

South River passed senior Trashaun Timmons to running back from quarterback. Behind Timmons, the Seahawks came close to winning this game.

“The youngsters have bought in and I’m very proud,” said South River coach Steve Erxleben. “There are a lot of upsides to this and so much football ahead of us.”

Both teams traded punts and turnovers on downs, limiting their 100-yard field to under 50 throughout the fourth quarter. Eventually, it had to benefit someone. When Old Mill picked up their pace, this shortened distance took little time to cover.

Led by senior Daquan Dorsey, the Old Mill fullbacks battled through clusters of Seahawks down the left flank, advancing to the 10-yard line. Dorsey cruised into the end zone, and after a failed 2-point conversion, the Patriots led the hosts, 6-0.

Old Mill remained loose and ready to sail. The running backs faced little resistance as they zoomed in on the wet ground, turning to an easy score from Jones. The two-point conversion, again, did not work.

Trailing 12-0, South River didn’t just need a good drive. He needed to achieve something big. Timmons did. He collected the ball from kick-off and started running, sliding through each grabbing hand to run 54 yards.

His comeback sparked the Seahawks. Quarterback Finnegan Mulvihill met Jeremy Berger to bring South River into the red zone; Timmons ran through the Patriots until 1.

Mulvihill pierced the plane and after a good kick South River cut Old Mill’s lead to 12-7.

Knowing now that they knew they could tangle with the Patriots, five points didn’t faze the Seahawks. They left an Old Mill drive with a recovered fumble, forced another away.

With this latest first-half campaign, the Seahawks have shown what could make them really good.

Mulvihill pulled out of the pocket around the 30, while Timmons sprinted to the furthest pylon he could find. The quarterback, two weeks into work, found the former quarterback for a go-ahead touchdown.

South River failed to convert the extra point, but the lead changed.

It would take more than a quarter for Old Mill to score again. A lengthy third-quarter campaign, consisting mostly of runs and benefiting from flags, slid Jones into the end zone and Keshawn Green converted two points.

The Patriots were able to take advantage of their 20-13 lead for 10 seconds.

Timmons escaped whatever Old Mill threw at him, racing towards the end zone. After Garrett Bates’ kick went through the crossbars, the Seahawks pinned their visitors in a 20-20 stalemate.

“These players, this program, this competition are very important,” Erxleben said. “I trust [Timmons] as the leader of this team. I mean, I’ve never seen a corner crack a defensive lineman.

Get the latest high school sports stories, photos, and videos from across the region.

Neither team concluded things in the settlement. Old Mill took the ball first in overtime and got it to term quickly: Jones had the touchdown, Dorsey the conversion.

Timmons had the touchdown on the South River corner. Mulvihill again tasked him with converting two runs.

The left side had been such a friendly space for Timmons all game, but Timmons didn’t go left.

The running back headed down the middle and crashed into a wave of Patriots that poured down on him. Linebacker Toman Jones, who led the tackle, leapt into the air, kicked both legs and led the winning run to his teammates on the sidelines.

“One hundred percent effort,” said Maximus Jones, who made numerous saves on Timmons throughout the game. “It’s all about the heart. And we had more heart today.

MOST and HRQL indices in recurrent ovarian cancer