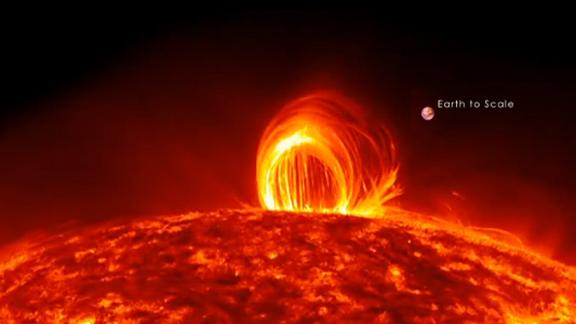 Coronal rain on a cold star?

“This redshift in the helium lines is indicative of a phenomenon called ‘coronal rain’, which has been observed on the sun for many decades,” Kanodia said. â€œCoronal rain occurs when part of the gas excited by the eruption falls back to the star’s surface. Some previous studies have suggested the possibility of coronal rain on M dwarf stars, but if our interpretation is correct, this would be the first quantitative observation of coronal rain on an ultra-cold dwarf and the first to use helium emission as an indicator.

Observations of flares and coronal rains on M-dwarfs could help astronomers better understand the physics of stars.

â€œFlares are thought to result from the disturbance of magnetic fields, but we currently don’t have a model of how magnetic fields are generated on stars like vB 10,â€ Ramsey said. â€œIt’s amazing to see the similarities in the details of activity between stars like this and our sun. Additional observations like this will hopefully help constrain models that may begin to explain this phenomenon. “

HPF, which was designed and built at Penn State and is installed on the Hobby-Eberly Telescope at McDonald Observatory in Texas, is one of the few high-resolution, near-infrared astronomical spectrographs capable of detecting these types of signals. from small, cool stars.

“It is important to note that we are detecting the redshift in the helium lines as well as other emission lines that suggest they are associated with an eruption,” said Suvrath Mahadevan, professor of astronomy and astrophysics at Penn State, HPF principal investigator, and article author. “We know that the magnetic structure of these stars can be very different from stars like our sun, so seeing this analogous activity is exciting and will hopefully lead to a better understanding of stellar magnetism and activity.”

Calculations for this research were performed on the Penns State Institute for Computational and Data Sciences Advanced CyberInfrastructure (ICDS-ACI), including the CyberLAMP cluster supported by the US National Science Foundation. The Center for Exoplanets and Habitable Worlds is supported by Penn State, the Eberly College of Science, and the Pennsylvania Space Grant Consortium.

Mate in the cold on the shortest day of the year